Virtual Reality (VR) learning exercises are recognized to boost motivation of students and to be highly scalable. In Central Tanzania, Helvetas and the Zurich University of Applied Sciences (ZHAW) conducted a pilot study with electrical engineering students at two government vocational training schools.

VR enables students to learn and experiment anytime and anywhere with different challenging or even potentially dangerous practical activities – with minimal supervision from an instructor. VR scenarios, or serious games, are fun and fascinating for students and can be one effective element of engaging learning environments. Empirical studies in the last years suggest that students perform better in exams when they exercised in VR before. In addition, the technology may fill in for any potential scarcity of physical teaching tools and infrastructure, resulting in better learning and motivation. 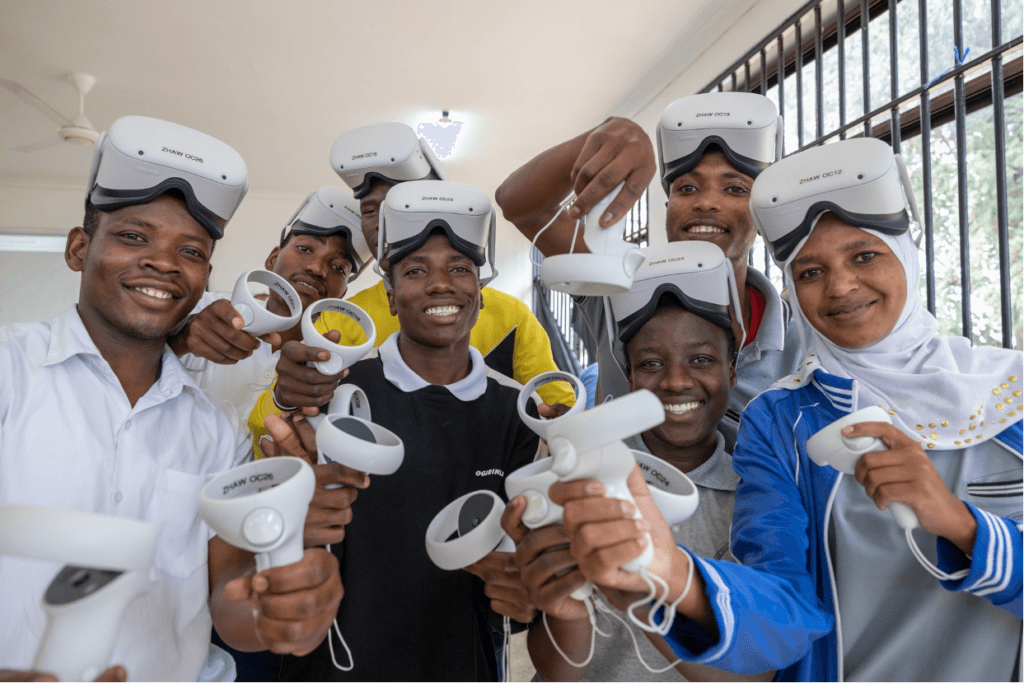 In June 2022, Helvetas and the School of Engineering of the Zurich University of Applied Sciences (ZHAW) explored the potential of using Virtual Reality (VR) technology with electrician students in Tanzania’s public TVET colleges. Tests were conducted in Dodoma and Singida, 2 of the 33 nation-wide colleges of the Vocational Training and Education Authorities (VETA). Helvetas currently works with VETA in two projects: a vocational skills training project in Central Tanzania, and in the gamification and marketing of mobile learning courses for vocational education. 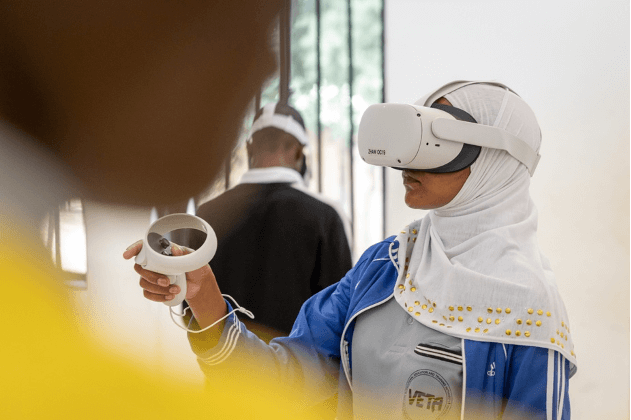 The VR scenario lets learners test a basic electrical installation of a lamp and a fuse box in a VR representation of a car garage and adjoining basement. After a short introduction, small groups of students and teachers conducted sophisticated electrical measurements that are part of their electrical engineering training curriculum: visual inspection, insulation measurement, residual-current device measurement. They must be able to correctly perform the specified action elements and respond to any faults in the system. Text and audio aids in Swahili guide students through the tasks at hand, which are closely adapted to the locally used electrical appliances.

The large majority of the 24 students and 6 instructors enjoyed the experience and found it highly motivating. Exposure to video and mobile games seemed to help with the learning the controls at the start of the testing, as younger teachers and students coped much faster. A survey will be evaluated in the next weeks to learn more about the experiences and challenges the students and teachers faced.

The pilot test is part of a bigger research project by the ZHAW and the Zurich University of Teacher Education (PHZH) that thoroughly test the effects of VR training on the grades of the final exams of Swiss electrical engineering students  – a research project financed by the Digitalization Initiative of the Zurich Higher Education Institutions (DIZH, see Virtual reality as a learning venue for basic vocational training). The goal is to examine the necessary didactic and design factors for an effective use of VR for basic vocational education in Switzerland and in Tanzania. In addition, the team will design a business and operating model for the production and distribution of VR learning units together with a Swiss software company. To this end, the team from the ZHAW and PHZH built the scenarios in the software Unity for Oculus Quest 2 using the VR Interaction Framework and tested the use case for apprentices who are preparing for their exams as assembly electricians in Switzerland: the correct safety check of an electrical installation as specified by the Swiss standardization organization Electrosuisse.

Next development steps for the VR pilot

The Swiss version of the VR scenario has further elements that support the learning process: a help screen that shows the work steps at hand and can offer further support if needed. Learners also selectively receive theoretical input via the chat box-like dashboard which must be completed during certain measurements for the scenario to advance. As a gamification element, a leaderboard helps to boost the motivation of the students. The results of the broader study by ZHAW and PHZH in the frame of this research project will give better insights into the effectiveness of the training scenarios.

VR will (for now) not change the way we learn, but well-developed VR training applications can be a valuable addition to engaging learning environments for vocational skills training. The tests in Switzerland and Tanzania have already shown where we can improve the tests for electrical engineering students: first and foremost, a multi-user feature, so that instructors can have remote access to students’ goggles for assistance without having to take off the students’ glasses. For the Tanzanian version of the scenarios: a full audio for assistance in Swahili.

A growing VR-ecosystem in East Africa

While the government agency VETA is only starting to explore VR for vocational training, VR is not completely new to the TVET space in East Africa. The Belgium Development Agency Enable piloted VR technology in 2017 as an IT aid to train hand pump mechanics at the refugee camps. Various INGOs are currently exploring the technology together with local partners in the region for skills in trainings in welding but there is not yet one bigger project that leads the pack.

Private virtual reality production companies have been active for some years now in Tanzania and East Africa. Since 2016, OnaStories in Tanzania combine VR/AR media training to corporates and NGOs with VR video production and journalistic storytelling for private and institutional clients. Large locally led IT-companies like Magilatech are starting to explore the VR technology. The pioneer in the region since 2015 is Nairobi-based BlackRhino VR who use immersive virtual reality technologies to develop educational material and marketing campaigns for large national and international organizations.

The testing in Tanzania demonstrates the fascination for the technology by teachers and students. It must be explored how a meaningful project could be implemented in the development sector. Digital Learning in general has still a long way to go in many places and VR can be one of the elements of modern online training platforms and system. As the use of VR is also in Switzerland’s vocational training institutions still limited and only starting, valid business cases that involve the already existing local companies need to be explored. 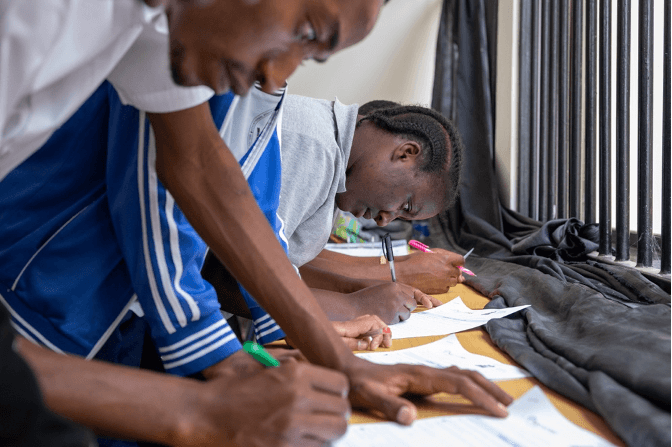